We Are Chester’s Tori Erskine steps inside the majestic surroundings of Chester Cathedral to experience the quinquennial production that is Chester Mystery Plays for the first time. Photos: Neil Kendall, unless otherwise stated.

As a theology and religious studies graduate from the University of Chester, the Chester Mystery Plays has always been something I’ve been keen to experience; not only for this reason, but also because they are an essential part of the city’s history and culture, spanning over an impressive 443 years.

This year’s production was especially special, as our editor here at We Are Chester, Angela, was making her on stage debut, playing the part of Mary’s cousin Elizabeth in the Nativity. 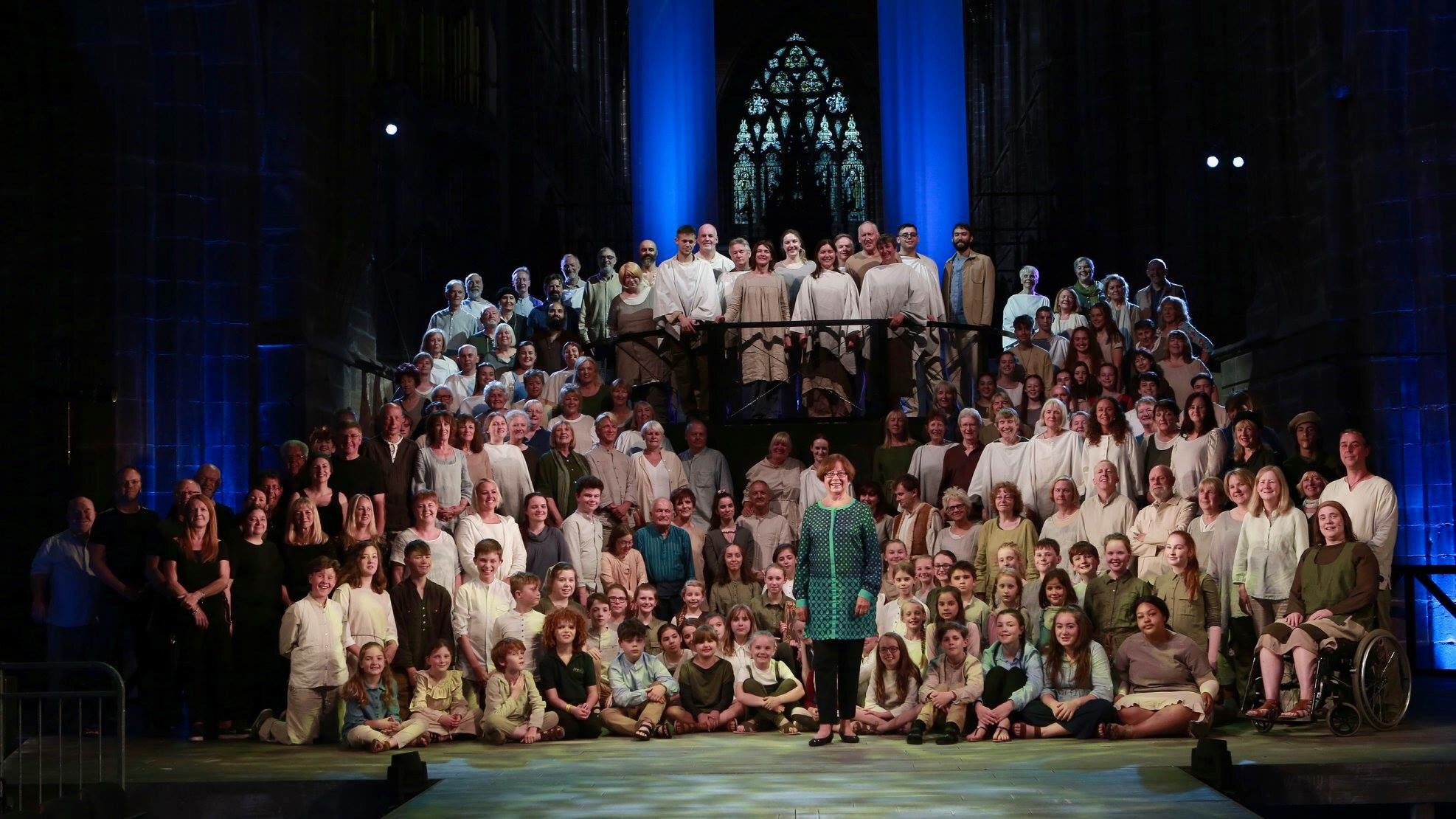 There’s no denying how the plays are a great way to bring the city together, as you recognise familiar faces in the audience, and catching none other than the Flipside Weekly Team, Parsley and Rach A Rama before the show.

A cheeky pre-show selfie of Angela with some of her fellow Chester Mystery Players and friends  Photo: Angela Ferguson

Chester Cathedral is one of those places that gives you goosebumps as soon as you walk in, making it the perfect setting for the historic plays. For a play that tells the story of the Bible, the setting for the production is perfect as it wouldn’t be as meaningful or spiritual in a theatre setting.

The beauty of the Mystery Plays is how welcoming it is to all ages and abilities, whether you’ve been involved in theatre productions before or not, everyone is welcomed to get involved.

The young actors in the play really need to be commended, particularly young Adam (Theo Lavin) and Eve (Rachel Devaney) who exquisitely presented the betrayal of God in the Garden of Eden.

I really enjoyed Becca Gates-Patch and Eve Lawlor’s portrayal of Lucifer and Lightborne. Throughout the narrative they stayed true to their characters and managed to keep their wicked tone as the story continued.

Presenting a book like the Bible in play form is a hefty task, particularly as a lot of people will have heard the stories already. Deborah McAndrew’s writing was perfect in accommodating all these trials, making the story fresh and new to someone who may not be familiar with the original texts.

As the writing needs to be praised, so does the stage production that accompanies the story perfectly. Dawn Allsop, the designer, created a perfect rustic look for the time, and it’s clear to see how waste is a key theme of the play through the props, particularly in the scene of the flood.

During the interval after having a chat with a few of the audience, we were all adamant that we would love some of the animals from the ark to display in our homes as they were so beautifully sculpted.

The attention to detail in the art of the play is highly evident in the closing poignant scene of the first half during the killing of the newborns. A blood stained red cloth with poppies is revealed as mothers cry out ‘My son!’ This is undeniably a heartbreaking and emotional point of the tale.

Deborah McAndrew wanted to emphasise the theme of conflict in the 2018 Mystery Plays and does so, utilising moments like this show how the Chester Mystery Plays is not your stereotypical nativity play.

The emotions continue into the second half where the life of Jesus is presented. Nick Sherratt’s presentation of Jesus is brilliant and emotive, particularly during the harrowing scene of Jesus’s death on the cross. Again the production team need to be commended on their construction of the set as the wooden crosses, technically and aesthetically, are used to encapsulate such a significant moment in the Bible narrative.

Throughout the play each moment is accompanied perfectly by the score arranged by the incredibly talented musical director, Matt Baker. Sarra Cooper’s vocal abilities are literally angelic as she performs throughout the plays.

You can really see how much work has gone into the plays. Every actor was on cue, every spotlight on point, and whether you’re a religious person or not, I definitely recommend experiencing it if you’ve never done so before.

Of course, seeing Angela on stage was my particular highlight! I know from speaking to her, how it’s been an incredible experience, and it’s so wonderful how Chester Mystery Plays can give everyone the fantastic opportunity to get involved with the plays and be a huge part of the city’s history.

After living in Chester for the last seven years, it was great to experience something like this in the city, created by the people in it. Definitely go experience it for yourself.

Chester Mystery Plays runs until 14 July, and tickets can be booked here.

Catch this production while you can as it does tend to sell out and only comes around every five years. This Saturday’s matinee is already sold out.