It was the ideal day for a riot.  The sun had been shining, autumn leaves on the ground and there was just a little chill in the air.

Mold was quite deserted at 6.15pm when we arrived but the crowds soon began to gather, wrapping their hands around a delicious hot coffee from Rubens café, before being summoned to action. 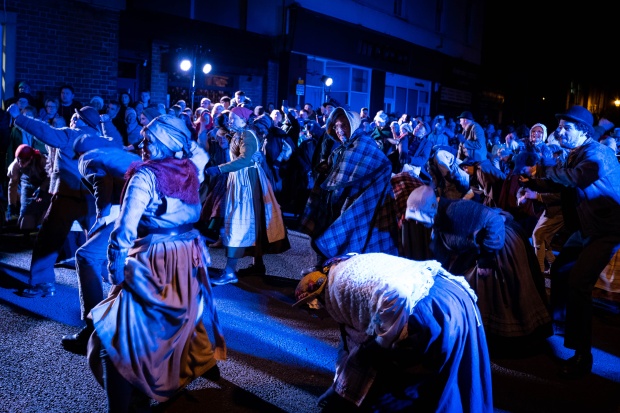 The Mold Riots is a creative and convincing piece of community theatre which is taking place on the streets of the town this week.  Telling the story of the ‘darkest day’ we are transported back to 1869 when two Welsh colliers were jailed for an attack on English colliery owner John Young.

Following the trial, the miners and their families revolt and the authorities respond by opening fire. Four people in the crowd were killed.

The promenade event is performed by a large community cast of men, women and children and four ‘guest actors’.  For the purposes of this review I will mark these with an asterisk although, truth to say, the standard of acting, characterisation and theatrecraft was so high that it is irrelevant.

The themes of exploitation, poverty, immigration and racism are as relevant today as they were 150 years ago.  John Young (Harold Hewitt) refuses his workforce the right to speak their native tongue in the mine, cuts their wages, brings colliers in from England to take the better jobs and possibly embellishes the truth about the attack. The trial, in Wales, is conducted in English and might wins out in the streets.

But Bethan Marlow’s play is not just a living history lesson – she explores the issues in much more depth.  Dialogue is in Welsh and English (not a translation but a gentle mix of the both) and the bilingual amongst the audience will benefit from their additional skills.

Robat (Gethin Alderman*) is a Welsh speaking miner who has a soft spot for Emma Young (Rebecca Snowden) and their love shines through as they struggle to learn each other’s languages.  Sadly he loses his life in the struggle but shines through his final soliloquy – in English.

Ailis (Amy Forrest*) struggles to feed her family and goes hungry rather than see her husband and son starve but has enough feisty energy to argue with the gobby Elizabeth Jones (Lowri Jones) as they sort the coal, the glo.  A superb performance by both.

The working classes are Irish, Liverpudlian, Lancastrian and Welsh – all with poverty and starvation in common. David (Kai Owen*) is pivotal to the action in his narrator-style role.

Director Katie Posner and her team have created an inspired stage for the action – from the High Street to the cattle market via the council chamber on film to St Mary’s Church in its imposing position, overlooking the town.

The child actors are fantastic, the singing is glorious, the setting beautiful.

The child actors are fantastic, the singing is glorious, the setting beautiful.  The rest of the run, until October 26, is sold out. If there is a black market for tickets, make sure you know the right people.

For more information on this and other Theatr Clwyd productions, visit the theatrclwyd.com website.