Our artist Dai Owen has been out and about in Chester, talking to some of those people who are without a roof over their heads in the city.

It’s a sad and harsh reality that there are still a number of people in Chester and across the country without a warm bed to curl up in this evening.

We must stress that there are a number of organisations supporting homeless people in and around our city, including the Share charity and ForFutures. We know that this is a very complex issue.

Anyway, we felt it important to cover this aspect of life in Chester, alongside our more usual pieces on arts and culture. We care deeply about all of those living and working in Chester and we wish that a day would come when no one ever had to spend the night out in the cold and rain. It was Dai’s idea to go out into the city to speak to and sketch some of our residents whose regular homes are on the streets.

Dai Owen says: “Well, I had a go at the idea of drawing some of the folk who live on the streets in Chester.  I decided to do six as a set and just let fate guide me to each one – rather than walk around with some fixed idea in advance.

“Each one I approached and asked if they would help were really helpful and interested. They were just great people and let me stand there a few feet away drawing.
“So I have a result, attached to this post. There is a title sketch and six individual sketches. I asked for their names to write on and a ‘short personal message’ they’d like to go with the drawing. These are now written on.
“Since doing this I realise I now have friends on the street who greet me and have a chat when I go by.
“I hope this project will give our readers a glimpse at the real people on our streets in Chester.”
Below are the powerful sketches produced by Dai. 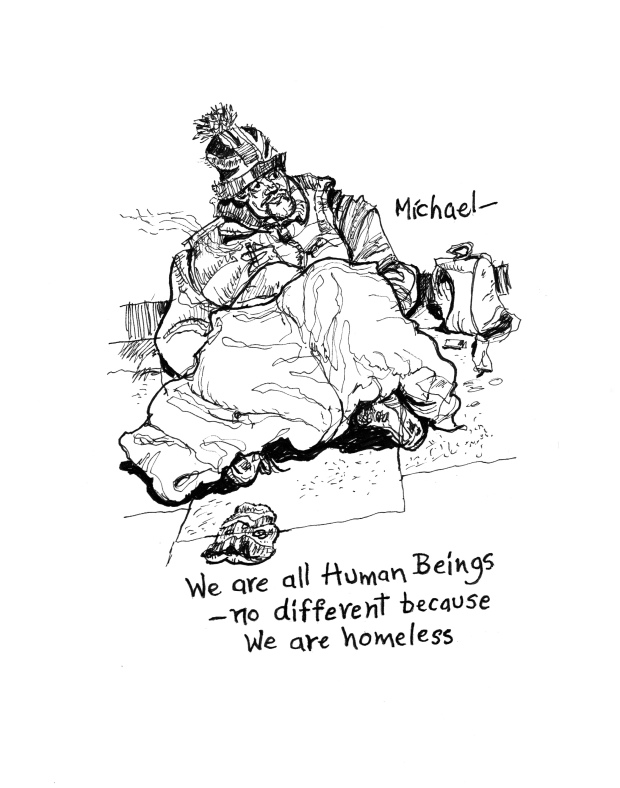 If you are concerned about supporting those who are homeless in our city then you can contact the Share charity or ForFutures.

For more of Dai Owen’s work, visit his sites: