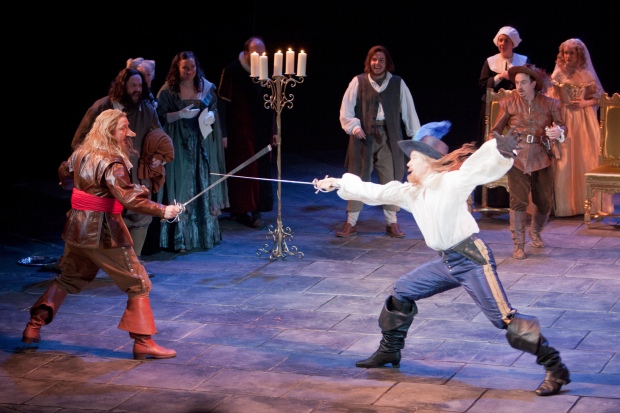 Apparently the word ‘panache’ came into the English language through the tale of Cyrano de Bergerac back in 1897, with a modern day equivalent being ‘swagger’.

Well, call it what you will, but the all Welsh ensemble in Theatr Clwyd’s latest production certainly have their fair share of it and the audience loved it. There was even a standing ovation involved when the time sadly came for us to go home.

It was an evening of true escapism, not only in terms of the stunning surroundings of the theatre, which overlooks the beautiful Clwydian hills, but in being taken on a journey back in time to ‘Three Musketeers’ era Paris, with a bit of a good old-fashioned romance and swashbuckling thrown in for good measure.

Cyrano de Bergerac is the third production of Tamara Harvey’s inaugural season as artistic director and it takes place in the Anthony Hopkins Theatre, making full use of the commanding surroundings. It is based on the Anthony Burgess translation and adaptation of the classic tale from the mind of Edmond Rostand. Burgess, best known for his dystopian satire A Clockwork Orange, incorporates rhyme into his translation, just as Rostand did in his 19th century play.

And so, to the story. Dashing soldier Christian seemingly has it all – good looks, a great career and the love of a beautiful woman.

But when it comes to expressing his love for the enchanting Roxane (Sara Lloyd-Gregory), Christian (Marc Rhys) can be left tongue-tied and prone to saying the wrong thing. This leaves him in grave danger of losing his love to the determined rival for Roxane’s affections, Le Comte de Guiche (Steven Elliott).

Luckily, Christian knows a man who can – write poetry, that is. In soldier and gifted poet Cyrano (Steffan Rhodri), Christian is fortunate enough to have a friend who – rather incredibly – puts aside his own feelings for Roxane to help his pal woo the woman of his dreams.

Poor Cyrano, who has crippling confidence issues when it comes to seeking love due to his large nose, must stay in the shadows – proverbially and literally. Despite his prowess on the battlefields and his successes when it comes to duelling, he plays a supporting role to Christian on this occasion by feeding him the right words to woo Roxane from beneath her balcony and via love letters.

Suffice to say there are a fair few interesting developments along the way, which leave the audience laughing and captivated in equal measure by the drama playing out before us.

The all Welsh ensemble enchanted and entertained the audience in equal measure throughout the performance, with a generous dose of hauntingly beautiful and harmonious singing and a liberal sprinkling of Welsh poetry from chaired bard Twm Morys making this a feast for the senses.

Full credit to Dyfan Jones for being the musical whizz for this production, along with talented director Phillip Breen and designer Mark Bailey, who worked together to make a truly memorable and hugely moving production.

Swaggerer-in-chief Steffan Rhodri left comedy character Dave Coaches from Gavin and Stacey well and truly behind at Barry Island to lead a lively and engaging ensemble of actors. The cast included some talented actors from the local community.

It seems unfair to single out any particular actors as the whole cast were excellent, but a special mention should go to Sara Lloyd-Gregory for her captivating and somewhat ethereal performance as Roxane, Sion Pritchard as Cyrano’s loyal companion Le Bret, Steven Elliott as Cyrano’s dark and ruthless nemesis Le Comte de Guiche and Rhys Parry Jones, who channelled a bit of the Hairy Bikers in his charismatic portrayal of poetry-loving baker Ragueneau. I was also blown away by the angelic voice of Gwawr Loader (Lise/Sister Claire). 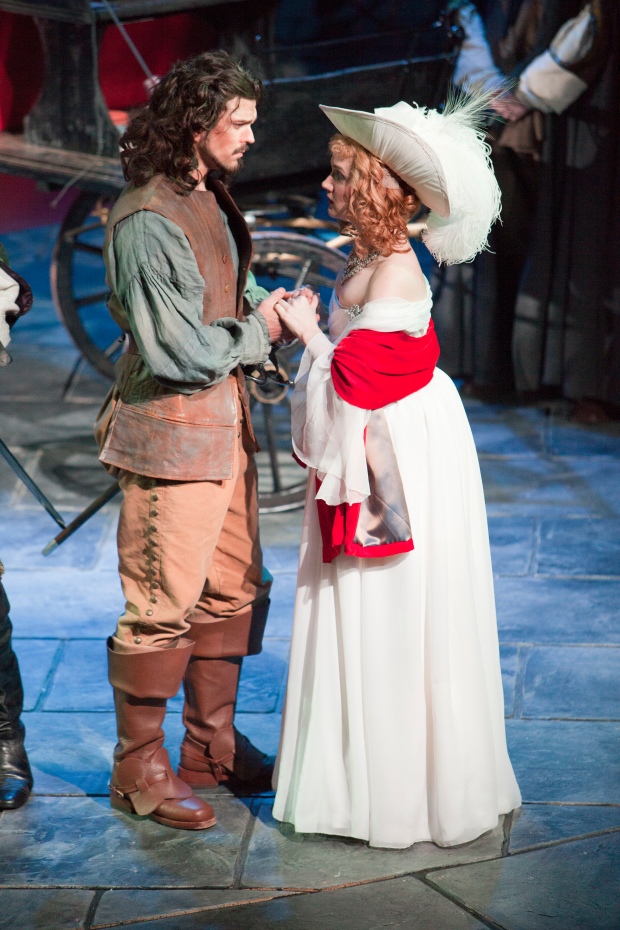 It’s clear to see that Theatr Clwyd is a jewel in the crown of regional theatre in the UK and a real asset to those of us fortunate enough to live close by. When can I go back?