We Are Chester writer Sophie Francis reviews Theatr Clwyd‘s latest production, Scarlett, staged in partnership with Hampstead Theatre Downstairs. The play centres on Scarlett’s weekend in Wales, where she seeks the perfect holiday home to escape the hustle and bustle of London. It is penned by award-winning Liverpool writer Colette Kane and directed by Mel Hillyard.

Scarlett is one of the funniest productions I’ve seen in a long while. It reminds me of an episode of Last of the Summer Wine, only here we’re talking about a group of women and we’re in Wales rather than in deepest Yorkshire.

From the first word, this production screams comedy. It opens with a choppy conversation between a scruffy old farmer and an elegant looking city girl. 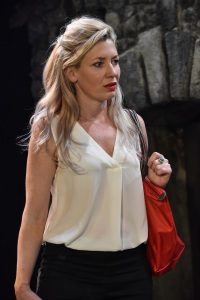 But that’s just it – it sets the scene for the whole play. There is juxtaposition throughout – the reality of life in London versus the not so glamorous farmer’s life.

For Scarlett, a weekend away in Wales turns out to be the beginning of a journey of self-discovery.

Leaving her high octane life in London, she heads for Wales in search of something she doesn’t know she is looking for – enlightenment.

Alongside Billy, Eira and Bryan the horse, she begins to appreciate the smaller things in life, sitting by an open fire under the cover of darkness, swimming in an open lake and finding the real Scarlett tucked away deep within. Until, that is, her mother and daughter, who she had claimed did not exist, turn up and throw a spanner in the works.

This is just the sort of thing I enjoy – a big fat drama. It’s beautifully simple – a heart-wrenching, eye-opening comedy.

It’s full of sarcasm, with a mother who thinks she knows best. You’d best not miss it. Three generations make up the characters, three characters that we will all have been, are, or will become at some point in our lives.

Billy is a very sweet 14-year-old farm girl played by Gaby French. Gaby does a wonderful job of portraying just that. She is my favourite character from the play. She rolls out fantastic one-liners that have the audience roaring with laughter.

“You got sheep poo between your toes.”

Lydia (Bethan Cullinane) is a typical student – opinionated, stubborn and foul mouthed. She is a character that I have no sympathy for at first, but I learn that she is just as lost and just as fragile as her mother, Scarlett.

Scarlett (Kate Ashfield) is a 40-year-old woman with unresolved issues, it would seem. At first you think she’s having some sort of breakdown, but then you realise that all she wants is a simple, easy life in the countryside.

Bette, Scarlett’s mother is a stereotypical overprotective, I know best, kind of character.

She’s a horrible, self-important and nasty woman who needs to learn to bite her tongue. She soon comes to realise the reasons behind her daughter’s choice after the ashes of Carol are spilt over Scarlett.

Lastly is Eira, played by Lynn Hunter. Now this character is very lovable and kind and somewhat hard-faced. She and her one liners had the audience in stitches. 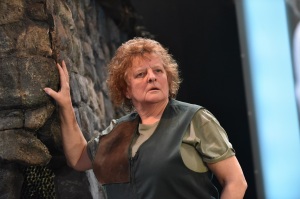 “You can hardly curl up on the couch with a bird of prey.”

There is a lot of wisdom contained in this play. A lot of information that really gets you thinking. It focuses on a story of  two worlds colliding, but eventually finding a way to coexist.

“Ninety eight per cent of our thoughts are repetitive.”

I have found myself thinking about running away into the countryside and living away from the hustle and bustle of the usual challenges that life throws at us.

And this play captures that exactly – that utopia that we all dream of. Perhaps it’s closer than we think.