Tori Erskine heads to Manchester’s Palace Theatre for a trip down memory lane, soaking up the sights and sounds of Buddy – the Buddy Holly Story. 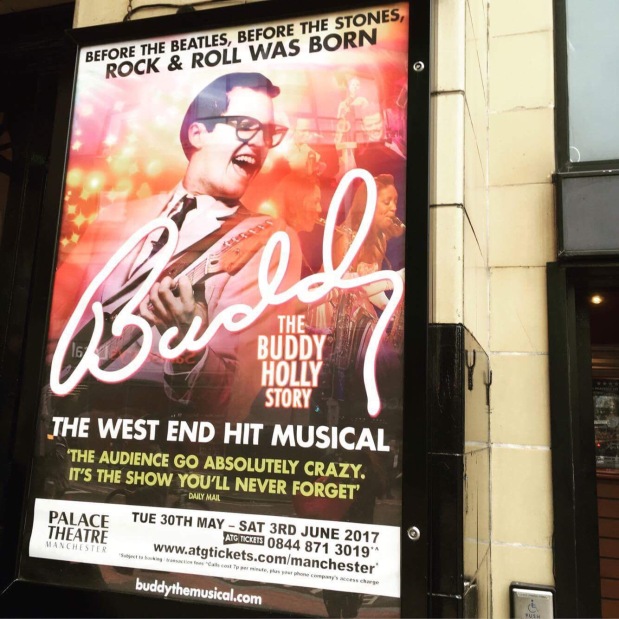 I think everyone has those songs that can take them back to a particular time or place – those songs that evoke memories of times spent with different people at different points in your life. For me, Buddy Holly’s Oh Boy takes me back to my childhood, when my dad would sing and play it on guitar.

I grew up with the music of Buddy Holly, so I couldn’t wait to see how he rose to fame in the hit West End musical, Buddy – The Buddy Holly Story.

It was my first time visiting the Palace Theatre in Manchester, and it was undoubtedly the perfect venue for the show. With its beautiful architecture and grand high ceilings, it was just waiting to be filled with the classic songs.

Even if you’re not familiar with Buddy Holly or his music, this show will undoubtedly convert you into a fan. The songs are woven into the story, showcasing how Buddy’s music changed his life from being a small town lad from Texas to a worldwide superstar.

For me, Buddy Holly (Alex Fobbester) and The Crickets (Joe Butcher and Josh Haberfield) were the heart of the story. Not only do they have perfect chemistry on stage, portraying the trials of becoming rock stars, from having heartwarming comedic moments as best friends, to the darker moments of their break-up, their musical talents are surreal.

It’s a difficult task trying to recreate the unique style of Buddy Holly, not just in his looks but also his vocal style, and Alex has it down to a T. I was mesmerised by The Crickets as they nonchalantly stood playing on the double bass and effortlessly played the drums.

There are many poignant moments in the play, fitting in with the story of Buddy Holly’s life. Most notably when Buddy bids farewell to his wife Maria Elena (Kerry Low) before he leaves for the Winter Dance Party tour, he acoustically performs the hit True Love Ways. It is a very emotional scene as we know it is the last time that he will see his wife, and the beautiful lyrics of the song evoke so much emotion:

And we’ll know why

Just you and I

During the final scenes the band performed a medley of songs such as Heartbeat and It Doesn’t Matter Anymore at the Iowa Clear Lake Concert. This was undoubtedly the highlight of the show. I was in awe of the talented individuals on stage as they performed, bringing an array of harmonies and instrumental abilities. It was the perfect way to celebrate the music of Buddy Holly.

At the end of the show, the audience gave a standing ovation and sang along to Oh Boy. The show was a wonderful tribute to Buddy Holly, showing how even after his death nearly 60 years ago, in a time when we definitely need it the most, music has the power to bring people together.

The Buddy Holly Story is showing at the Palace Theatre, Manchester until Saturday, 3 June.

All photos courtesy of PR unless otherwise stated.