We Are Chester’s Angela Ferguson and her two daughters head to Theatr Clwyd in Mold to watch this year’s rock ‘n’ roll panto. Photos: Brian Roberts.

We’ve a new festive tradition in our family – a trip to watch the rock ‘n’ roll panto at Theatr Clwyd.

It’s right up there with the turkey and the tinsel and the decorating of our four Christmas trees. Yes, that’s right – four. Okay, three of them are teensy weensy trees, but you get the picture. We like doing the festive family stuff – with bells on.

Theatr Clwyd always put on a blinking good panto and we aren’t disappointed as we take our seats in the Anthony Hopkins Theatre to watch this year’s production of Sleeping Beauty. 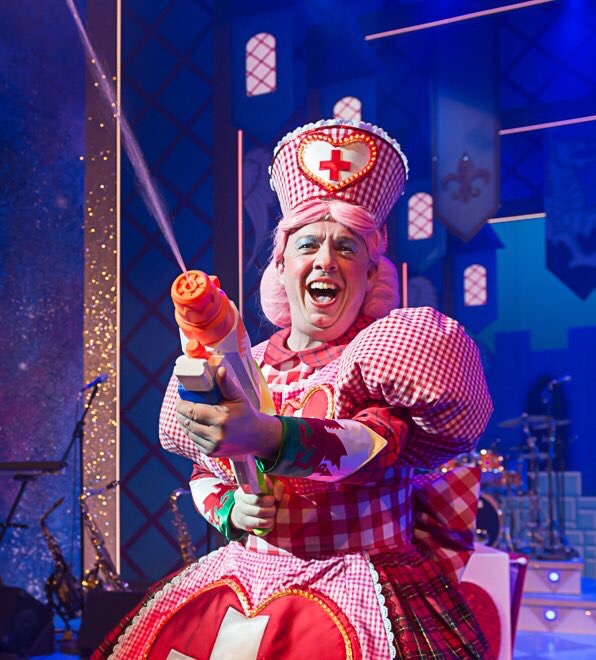 Here in Mold, we have all the ingredients required for a funny and festive escape to the theatre for all of the family. Sean McKenzie is superb as Nurse Tabetha Trott, the mischievous dame with a heart of gold and a fine line in statement frocks. He also delivers the gags with great finesse, providing the obligatory jokes for the older folks that go over the young children’s heads, making the show good fun for all ages.

The cast have talent in spades, ably demonstrating their ability to multi task to the extreme. Is there such a thing as extreme panto? Well, if there is then this is it.

The cast, directed by Zoe Waterman, turn their hand to singing, dancing and playing a variety of musical instruments, as well as offering impromptu witty retorts in response to the occasional audience contributions. They grab and hold the attention of the audience in the packed theatre, which feels like a magical Winter wonderland.

Credit where credit’s due, the designer Adrian Gee has devised a magical set. We see in front of us what feels like the best advent calendar ever, with multiple layers revealed and our eyes treated to the sight of blingy chandeliers, colourful costumes, glitter galore and even bubbles.

We are well and truly transported into the heart of Pantoland, Theatr Clwyd-style, with some heartwarming nods to our location, including one stirring rugby-themed performance that can’t fail to move you. And the gags come as thick and fast as a flurry of Flintshire snow, covering even topical issues like Brexit.

There are a fair few surprises along the way as we listen to the northern tones of Fairy Fanciful (Zoe West) setting the scene as our narrator, introducing us to the main characters.

Will she overcome the curse with help from fairy in training Frederica (Emmy Stonelake) or will she end up having a rather lengthy nap which takes us from 1860 to the swinging sixties? And will she or the dashing Simon Steadfast (James Ifan) find true love? Or will it be a trip down the aisle for the Princess and Morgana’s hapless son Mordred (David Heywood), who is a mummy’s boy with aspirations to be Austin Powers, depending on what mood he is in.

We also see sterling performances from the intriguingly named Domestos (Greg Coulson), King Camelot (Rowan Talbot) and Harold the Herald (Luke Thornton) as we go deeper into the heart of Pantoland.

All of the cast shine on stage and make this a show to remember. Trust me, you won’t want it to end, right down to the very last toe tapping tune, performed with gusto by the cast, overseen by musical director Tayo Akinbode. It never fails to amaze me how they move from acting to playing anything from a guitar, saxophone or even a harp with real panache. And they genuinely seem to be enjoying themselves, even though it must be a gruelling run of two shows daily through to 20 January.

The Theatr Clwyd panto has once again proved so popular that it is already largely sold out. If you haven’t yet booked your tickets then the time to do it is now. You won’t regret it.