The Freezing Four, ie We Are Chester Editor Angela Ferguson, her brother and her two daughters, gamely brave the winter chill to check out Storyhouse’s first ever Christmas show –  The Secret Seven. Will they solve the mystery that unfolds before them? Photos: Mark Carline.

There’s an air of nostalgia and excitement as my brother and I take our seats in the main theatre at Storyhouse. The name Enid Blyton may not be as well known to children today as it was when I was a child some, ahem, years back, but hopefully this moonlit, fairy light-adorned production will bring the joy of Blyton’s much-loved creations to a new generation of fans, including my two daughters who accompany us.

I so wanted to be part of a gang like The Secret Seven when I was a child. I even went as far as stocking up on a series of guidebooks on how to be a detective and spy. It’s fair to say that if the Secret Seven had contacted me by way of covert torch-based messaging, I’d have signed up quicker than you could say ginger beer.

Prepare for a visual and aural feast as we visit the village of Cherrydale in Wirral in this production from the pen of award-winning playwright Glyn Maxwell. The energetic cast make the most of the space around them as they fly about the place – sometimes quite literally. In fact, keep your eyes peeled as some cast members in various guises demonstrate a good head for heights.

The Secret Seven at Storyhouse perfectly encapsulates that sense of mystery and longing for an adventure, dishing up ladles of suspense and festive magic for this theatrical Christmas offering. We are treated to a well-oiled and smoothly delivered machine that is the rapidly changing set, courtesy of James Perkins, complete with Christmas card-esque scenes, a former air raid shelter, a haunted cottage and some fantastically elegant post-WW2 outfits. And the trimmings for our festive fayre come in the form of a liberal sprinkling of hauntingly beautiful music, a right (Christmas) cracker of a community cast and a rather woofly appearance from a special cast member. Said performer may well steal the show. We won’t say any more as we don’t want to ruin this tail for you. 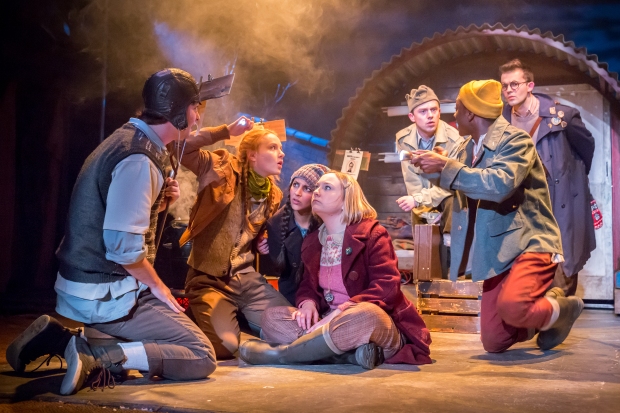 There’s everything you could possibly need from a festive production at play here, including a mesmerising performance from University of Chester MA student Evangeline Hartley as Goldie. And the entertaining Triumphant Two, Susie (Rebecca Birch) and Binkie (Tillie-Mae Millbrook) make for a comedic double act as they get in on the action.

The Secret Seven have a range of quirky characters, breathing new life into the much-loved stars of Enid Blyton’s books. Colin (Kaffe Keating) is the epitome of planning and research. Can someone please publish a copy of his wondrous Christmas Almanac?! We’re sure it would take the stress out of anyone’s Christmas planning. He is ably supported by fellow Secret Seven members Pam (Aryana Ramkhalawon), Barbara (Molly Logan), Peter (Harry Jardine), Janet (Harriet Slater), George (Anton Cross) and Jack (George Caple). All of the cast look like they are thoroughly enjoying playing their part in this historic production.

Barbara Hockaday also does a fine job of portraying pillar of the community, Mum, complete with rising Christmas stress levels while wielding that all important turkey baster. She also finds the time to play a number of musical instruments and be musical director for the show. And let’s not forget our charismatic Cockney baddie Joko (Nick Figgis), who is determined to cause trouble in Cherrydale. Nick Figgis also plays Dad.

This is a fabulous first festive production for Storyhouse, directed by Alex Clifton. May there be many more for the Freezing Four and the rest of the Storyhouse visitors to enjoy in future, complete with lashings of ginger beer*.

*Other beverages are available at Storyhouse