Straight from dusty ranches of California to our very own theatrical paradise, John Steinbeck’s Of Mice And Men brings all of the charm and charisma of an American performance to Theatr Clwyd. Full of political turmoil and questions about what it really means to be human, Of Mice and Men takes the audience on an emotional and thought-provoking journey and, in the process, makes you realise why it’s considered the best American novel ever written.

We’ve all had a dream.

Whether that be to become the first person on Mars, or to simply be able to eat a Mars bar, dreams are often what make life that little bit more worthwhile. And nowhere epitomises a ‘dream’ more than America. The prospect of heading to “the New World” to find your own fame and fortune has been part of the United States marketing campaign for the past 600 years or so.

So, for anyone born in the Land of the Free, it would almost seem like a given that your dream will come true.

However, as so many stories have told over the years, things are often much further from the truth. And one story that encapsulates everything that it means to have a dream that is never realised is John Steinbeck’s Of Mice and Men, appearing at Theatr Clwyd in Mold. 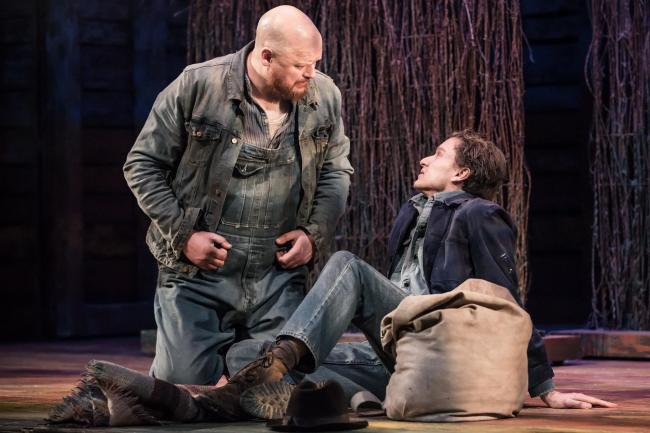 Of Mice and Men was inspired by Steinbeck’s own experiences during the Great Depression of the 1930s.

During a time where money was a hard-commodity to keep a hold of, people were waking up to lives they couldn’t afford any longer and had to travel around the country for work.

Two such individuals, as the story tells, were George and Lennie (played by Richard Keightley and Matthew Wynn respectively), a pair of migrant ranch workers who had spent most of their lives together, wandering from place to place. During their friendship, the pair built their own dream; one that involved them owning and running their own ranch so they could relax and not have to worry about work ever again.

With little more than this dream and their clothes on their back, the wily and bright George wants little more in his life than to have his own independence, be his own boss, and, most importantly, to ‘be somebody.’ The gentle giant Lennie, however, has much more modest aspirations; he merely wants to be with George and join him in his paradise ranch.

Heart-warming at times, depressing at others

The acting, particularly from Keightley and Wynn, was heart-warming at times and depressing at others. Whilst clear the pair had a partnership, the annoyance that George suffers from having to look after the bumbling Lennie means George’s dream is always just out of reach. Whether it be due to no fault of his own or through accident, Lennie seems to always be in the crux of some tragic events that means the pair must pack up and move on along to the next ranch. And whilst he is simple and naïve at times, Lennie’s character perhaps has the most depth as he frequently suffers moments of clarity amidst his otherwise child-like mental state.

Of Mice and Men demonstrates a powerful portrait of the American spirit, a resolve to carry on fulfilling that sacred dream everyone owns, as well as offers up a heartbreaking testament to the bonds of friendship and what it really means to be human.

I had a long discussion with my partner about the likes of Steinbeck being taught in schools in the UK, and whilst I actually prefer authors from across the Pond, the idea that British literature should be what students are taught remains a valid point. We learn about the likes of Shakespeare, Dickens, Kipling, Woolf and other British contemporaries because they deal with British issues.

However, something that translates as poignantly from Steinbeck’s wonderful story is as relatable as anything from the UK; we are all human and possess a bond to one another, whether that be friendship, family, or employment, the loss of which, affects each and every one of us. 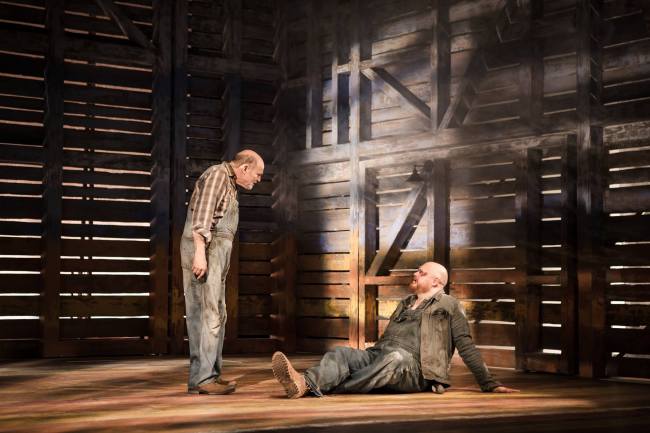 Of Mice and Men deals with deep-rooted issues that are, unfortunately, still as prevalent today as they were 100 years ago; treatment of women, a woman’s place in society, the treatment of ‘ethnic minorities’, and the treatment of individuals suffering from mental health issues. Whilst some steps have been taken towards rectifying the wrongs in the world, the issues raised in Of Mice and Men are still in effect in 2018.

And maybe that’s the most endearing message of the story, that we are all humans, yet this is how we treat one another.

Of Mice and Men has been considered a challenging play, and within the first half of the performance, I heard no fewer than seven racial slurs, but it does not sugar-coat the issues raised. They are all there for the audience to experience and feel, whether we want to or not.

This review became a lot more political than I anticipated, but as it is one of the story’s leading topics, I feel it was appropriate. If, however, the review has put you off seeing the play a little, I urge you to take head as to what director Guy Unsworth had to say about bringing Of Mice and Men to the stage;

“Of Mice and Men is one of the great American stories that has stood the test of time. It’s not only about the Great Depression in 1930s rural America but a timeless tale of loyalty and the struggles for survival in a cruel and competitive world…It is also one of the most beautiful stories ever told – both heart-warming and breaking at the same time. I fell in love with it when I studied it as a teenager,…and when I mention the title, so many people have a great fondness for it too.”

Politics aside, Of Mice and Men, is a truly heart-felt analogy for the American Dream, something that Hollywood has helped generations of children up believing in. It showcases a friendship built on a dream, and on a mutual belief in one another. A world where it may be dog-eat-dog, but friendship can save you. And where dreams are eternal.

Starring Richard Keightley as George, Matthew Wynn as Lennie, Andrew Boyer as Candy, Cameron Robertson as Slim, Darren Bancroft as Carlson, Kevin Mathurin Ford as Curley, Rosemary Boyle as Curley’s Wife, and Robert Ashe as The Boss, John Steinbeck’s Of Mice and Men is currently on-stage at Theatr Clwyd from 19th February to 24 February. Performances start at 7:30 pm each night, with a matinee performance on Thursday 22nd at 1 pm and on Saturday 24th at 2:30 pm.

We Are Chester ∗∗∗∗ (4 Stars); witty, humourous, heart-warming, life-affirming, Of Mice and Men has all of these qualities by the bucket full. It’s probably best to go when the kids aren’t there to watch it as part of their English Literature studies however, as there were more awkward giggles than you’d probably normally find in the play’s runtime, but still an outright enjoyable performance. Be warned though, there are instances where smoke is used (quite heavily, too) and two cases of a prop-gun firing.