Angela Ferguson heads to Storyhouse to fulfil her long-held dream of watching Evita the musical live on stage. Photos: PR

Our seats in the Storyhouse theatre feel like scarlet time machines as we are transported from the historic streets of Chester back to the tempestuous and rapidly changing landscape of 1940s Argentina.

There’s a whole maelstrom of emotion going on as we await curtain up, ready to savour the sights and sounds of Evita the musical.

Now this is a production that I have been looking forward to watching for a long time. I’m a huge fan of Andrew Lloyd Webber and Tim Rice’s work and have loved listening to songs from Evita over the years, knowing most of them word for word (I’d love to be an understudy if Bill Kenwright is reading and doesn’t mind overlooking my not so dulcet tones).  I have enjoyed listening to Elaine Paige, Julie Covington and then Madonna, in turn, take on the mantel of portraying the first lady of Argentina Eva Peron.

And I can see just what all the fuss is all about when it comes to this particular touring production, brought to the stage by Bill Kenwright by special arrangement with The Really Useful Group. We get to witness the immense talents of Madalena Alberto, making this high energy role her own with her beautiful voice and her poise and commanding presence as she graces Storyhouse’s proscenium stage. 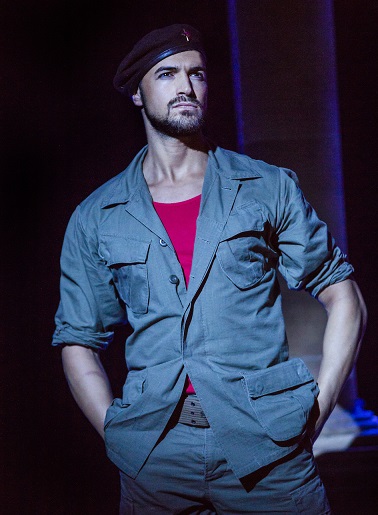 Madalena is a tour de force on stage, with an incredible vocal range and a rather dizzying array of costume changes taking her from her humble beginnings as a young woman living in poverty to her life amidst the bright lights of Buenos Aires.

She and the rest of the talented cast grab our attention and carry us at an impressively fast pace through the story of Eva Peron through the emotive music, drama and dance jam-packed into this production. We delight at watching the majesty of the tango unfolding before us. And we adore listening to the astoundingly powerful music produced by the hugely talented orchestra members down in the pit. They do a superb job of adding a heady dose of musical oomph to the enchanting harmonies of the cast as they offer up absolute gems such as Don’t Cry for Me Argentina and Another Suitcase in Another Hall.

Our story begins with the momentous news that Eva Peron has died and then we turn the clocks back to chart her rise to fame and power, working as a radio broadcaster and actor before meeting Argentine dictator General Juan Peron (Jeremy Secomb) and becoming Argentina’s first lady.

There is also a superbly brooding and charismatic performance from our narrator, the activist Che (Gian Marco Schiaretti), who deftly takes us through Evita’s story, offering his thoughts on the comings and goings in Argentina’s seat of power. And there’s the inevitable rollercoaster of emotions and a shed load of major ear worms from Lloyd Webber and Rice that will be going around your head for hours or even days afterwards.

Another important mention here is for the young cast from Stagecoach who do a sterling job of supporting the touring cast while they are at Storyhouse. This includes one particularly show stealing performance from a young girl as she sings the Santa Evita lyrics with her beautiful angelic voice. There are very nearly tears falling down my cheeks. This is sheer musical heaven – and I do not want it to end.

Although still firmly seated in my scarlet-hued mini time machine, I’m tapping my toes and singing along in my head as each and every song is performed, accompanied by a powerful orchestra and harmonious singing from the cast. It is spellbinding and the audience clearly agree with me as we rise to our feet to give a well-deserved standing ovation to the cast.

Bravo to the cast and crew of Evita, which runs until Saturday 21 April. Catch it if you can. To book, visit the Storyhouse website.