Our editor Angela Ferguson takes her daughters along to Theatr Clwyd to experience what has now become an annual festive tradition for the three of them – watching the theatre’s rock ‘n’ roll panto. Photos: Sam Taylor

If a fun-filled afternoon or evening of entertainment filled with superb music and laughter suitable for all ages is what you are after then you’ve come to the right place. Theatr Clwyd has all of this in spades, which is why it’s become an annual tradition to bring my daughters here every Christmas.

In fact, my brother has also got in on the act, making it an annual trip for him and a good friend from his university days. Once you’ve sampled the Theatr Clwyd panto you will want to return year after year, I can promise you that. And if you go for the matinee you’ll get to see the stunning views across the Clwydian Range of mountains from the theatre’s first floor bar. What’s not to like?!

Anyway, to business. What did we like about our visit? Well, my daughters were chuckling away throughout and there were plenty of jokes aimed at the grown ups in the audience which triggered peals of laughter. Indeed, our hero for this year’s panto, Dick Whittington is a panto writer’s dream and our writer, the uber talented Christian Patterson, has gone to town here. There are plenty of local references as our dashing hero Dick (Peter Mooney) bids to be made Mayor of Mold, from a fab sign for the legendary sweet shop Spavens on the stage to a reference to Moel Famau and the legendary Tiv in Buckley, a place where I spent a fair bit of my youth.

And the music is absolutely fantastic, with a range of classics from the foot stomping sounds of Led Zeppelin’s Immigrant Song and White Stripes’s Seven Nation Army to a dash of the Ramones with Blitzkrieg Bop, along with some newer songs, all performed by the multi-talented cast.

It’s at this time of year in particular when I curse the gods of talent that didn’t bequeath me with an amazing voice, a talent for acting and dancing and the ability to play everything from the piano to the alto sax. If they had, then I’d definitely want to be a part of the Theatr Clwyd panto, as it looks like so much fun. Said gods of talent were undoubtedly far too busy endowing our cast with their staggeringly wide-ranging set of skills.

This year’s Theatr Clwyd panto includes the welcome return of Dame extraordinaire Phyllip Harries (Sarah the Cook), with a gift for rendering the audience speechless with laughter with his comedic talents and quips. And we adore his suitably over the top wardrobe, as befitting our Queen of Dames.

Special mention must also be made of assistant director Francesca Goodridge, who bravely stepped in as last minute understudy for Emmy Stonelake (playing Alice Fitzwarren) when we watched the show. She had three days to rehearse the role after Emmy injured her leg and did a sterling job, earning herself a huge round of applause. Emmy is now back on stage. 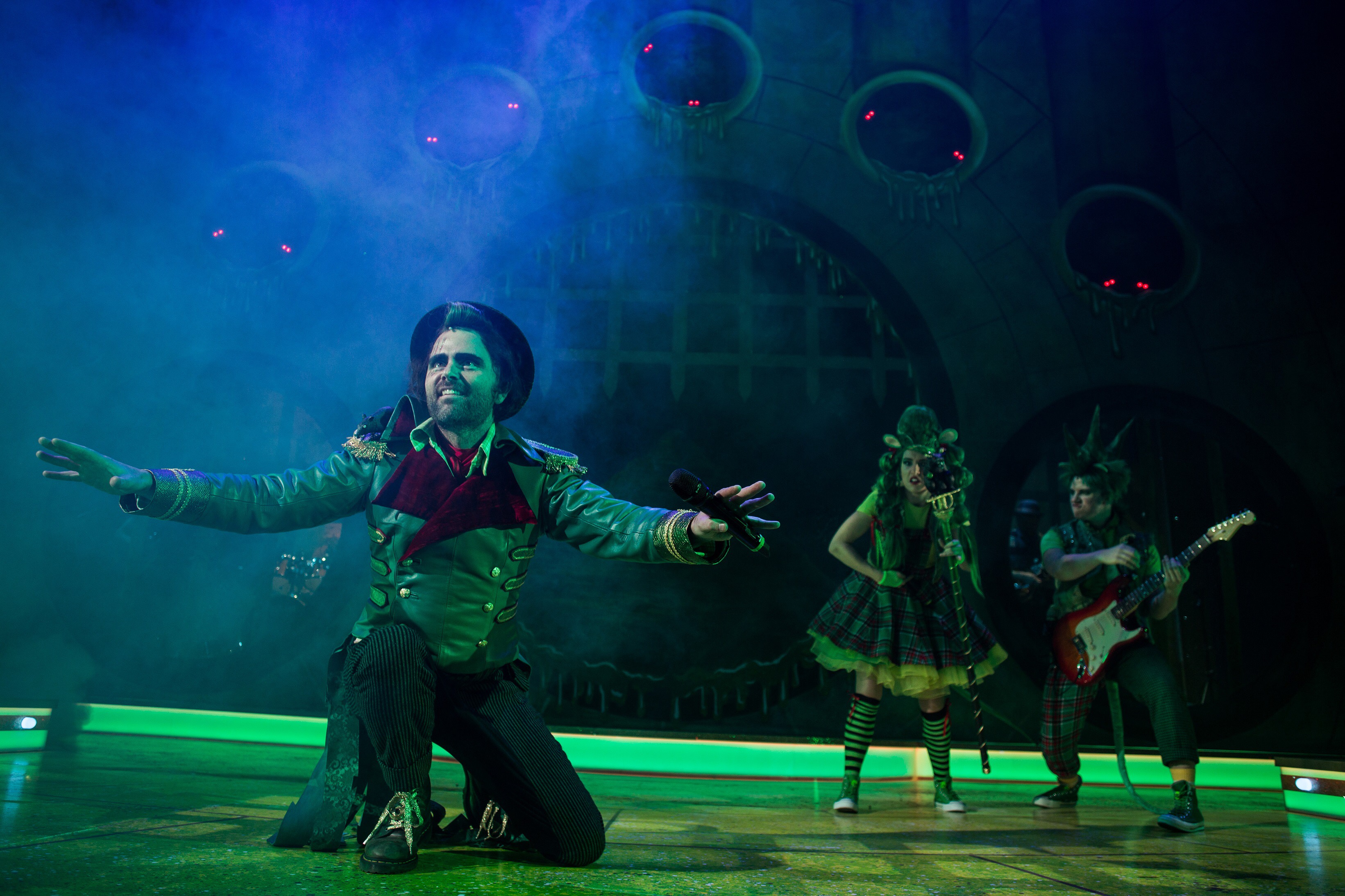 There’s plenty of glitter and glitz on this shimmery set, in true panto style, along with the ever important boo and hiss quotient, aimed at the fiendish villain King Rhydian the Rat (Royce Cronin) and his cronies Scratch and Sniff (Alice McKenna and Luke Thornton).

We also marvel at the acrobatics of our lovely cat Tommy (Toby Falla), enjoy some magical puppetry in addition to our human cast, and admire the charismatic stage presence and beautiful voice of Lynwen Haf Roberts (Sultana). And the enchanting Fairy Betty Bowbells (Anna Westlake) keeps a watchful eye on proceedings, ready to save the day with her special leek-shaped wand. Denbighshire’s Daniel Lloyd has a commanding presence on stage as loveable hero Wally Fitzwarren, equally at home playing guitar, singing or ad libbing with fellow cast members.

Credit where credit is due, the team behind this epic production – including director Zoë Waterman, designer Adrian Gee, musical director Tayo Akinbode and choreographer Will Tuckett – have once again put together a Christmas cracker of a panto which never fails to deliver. And it will undoubtedly live on in the memories of the audience for years to come, forming a festive tradition for generations to come.