The last time I covered a Sinnerboy Gig, was two years ago, in the same Venue, Alexanders live music bar, in my home city of Chester, and strangely enough in exactly the same month.

Fast forward to January 2019 and here I am again, and my anticipation of a good gig was
extremely high, as the well remembered first gig was superb, and, WOW, I wasn’t to be
disappointed, as Barry Barnes, Dave Burns, and Jon D Clayton, really turned the wick up and some, on this visit.

An exuberant audience were treated to a two set performance that paid homage to the very best of the Rory Gallagher back catalogue with the first set chosen by the punters and kicking off with Moonshine.

A stellar first set which included, Crest Of A Wave and In Your Town, was proceeded by a short break, after which, the second set started with an Acoustic Set , delivered by Barry which also saw, the skilful playing of a Mandolin and some vigorous Foot Stomping from a raucous crowd of on lookers. 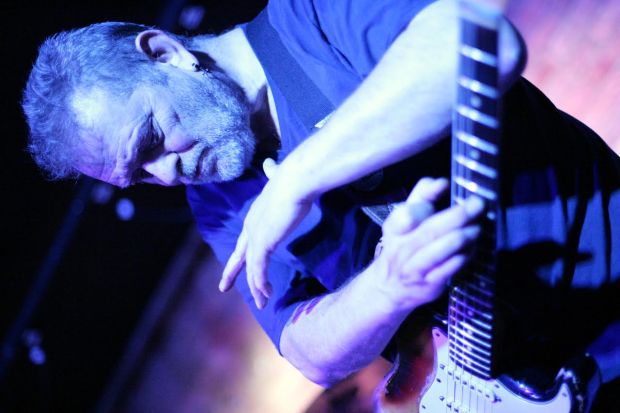 Helping out with proceedings at this point with a couple of Blues numbers was Harmonica player Paul Westwell, who blew up a veritable storm, as the crowd boogied on down, Barry, went walk about as, Walk On Hot Coals and A Million Miles flowed from his deft fingers, in fact, there was a point at which, he sustained a finger injury as his left hand moved along the strings, probably an E sharp.

Throughout the evening there was a genuine rapport between the mercurial Mr Barnes, the rest of the band, and the assembled throng culminating in much laughter when Drummer, Jon, pretended to wipe the gathering dust off his Cymbals as Barry re-tuned his Guitar.

With Rory no longer with us, this Band, is the closest I have seen paying homage to the Great Man, to tag them with the title Tribute Band, would be very wide of the mark as they are all consummate Musicians in their own right, and a worthy addition to the Legacy of a fabulous Guitarist and Song Writer.
Rating..10/10