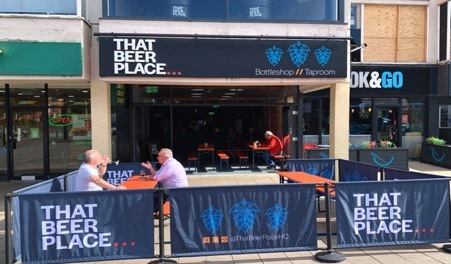 The new home of That Beer Place has opened on Foregate Street. Owners Lisa and Dale Lord have converted the former bridal store into a new two-storey home for their business, with the bottleshop and taproom on the ground floor and a tasting room on the first floor.

The couple first opened the business in Chester Market back in 2018, during a time when the market was struggling to attract new customers.

Alongside fellow traders, they helped make the market go from strength to strength, which led Chester to be awarded the title of best small indoor market by the end of 2019.

The business has built up a loyal customer community over the years, not only owing to its world-wide range of beers, but also thanks to the welcoming staff and the friendly atmosphere it radiates.

Lisa and Dale said the response and support from customers following the launch of their new high-street venue had been “overwhelming”.

Lisa said: “Our opening weekend has been amazing! We’ve seen lots of familiar faces and met some lovely new people.

“Other businesses on the street have been in to welcome us and wish us luck, which is fantastic.”

The new Foregate Street premises are said to showcase the best beers produced in the UK, along with a range of soft drinks, ciders, small batch gins and a wine list handpicked by Wine School Cheshire for the ‘non-believers’.

And free beer tastings are encouraged by the staff as they are convinced the bar has “a beer out there for everyone”.

The owners describe the new two-floor venue as a “beer and cider heaven”, as they offer 10 ever-rotating beer taps, 4 cider taps, carrying over 400 bottled and canned beers and over 100 ciders.

Dale has even designed their draught system from the ground up to allow different beers to be served at style appropriate temperatures and carbonation levels to be regulated.

Dale said that the team endeavoured to bring the very best out in each style of beer and really showcase the style’s unique characteristics.

The move onto the high street came as a shock to many, after the announcement in 2021 that the business would not be moving into the new market building as part of the Northgate development.

Dale said: “The constraints the new market’s business model would have put on us would have meant we would have to cut back on many things we do today.

“Reducing our range, restricting our ability to run events and have outside collaborations, cutting back our wholesale and beer training operations and even limiting our online sales.

“Essentially, we’d have to stop being us and all at a very significant increase in cost. Why would we want to pay more to be so much less? It just didn’t make sense. Going out onto the high street was our only choice.”

Despite the launch of the new venue, Lisa confirmed that the original stand in the Chester market will remain open.

“We love the current market, and another empty unit is not what people want or need to see. We want to be there until the end to help support our fellow traders that still have their businesses in there,” she said.

The owners expressed how eager they are to make the most of their new venue by hosting regular bespoke beer and cider tastings, as well as collaborations with breweries, cider makers and fellow indies.

Dale added: “I’m really excited about having a tasting room that will allow us to run more events and have more fun collaborations with indies from all across Chester and beyond.”

The first event in their busy diary is a blind tasting event with Manchester-based craft beer superstars, Cloudwater, on 25 May.

Tickets are £25 and can be bought at the new Foregate Street venue.